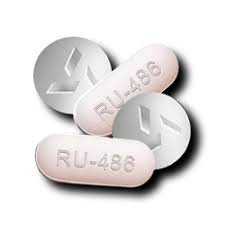 Now legal for use in our country, RU-486 (mifepristone) kills an unborn baby 5-7 weeks old by blocking food and oxygen so that the baby eventually starves or suffocates to death.

Mifepristone is a complex chemical molecule effecting multiple systems of the woman’s body, her reproductive system, cardiovascular, digestive, and central nervous system as well. Misoprostol, the prostaglandin ordinarily used in conjunction with RU-486, has its own side effects, triggering the painful, often nauseating contractions that expel the dead baby.

Despite heavy publicity by Planned Parenthood and NARAL that the RU-486/prostaglandin method is a safe, easy and effective alternative to surgical abortion a very different picture emerges from the actual results reported from the clinical testing and from use in other countries.

SAFETY WARNINGS Women with any of the following conditions may be screened from using RU-486 for fear that the drug might prove dangerous or deadly for them.

Besides the physical risks and complications of this abortion method, it has been described by Edouard Sakiz, former chairman and CEO of Roussel Uelaf, the Germany company that originally produced it, as “an appalling psychological ordeal” for women who have to “live with the abortion for a week using this technique.”